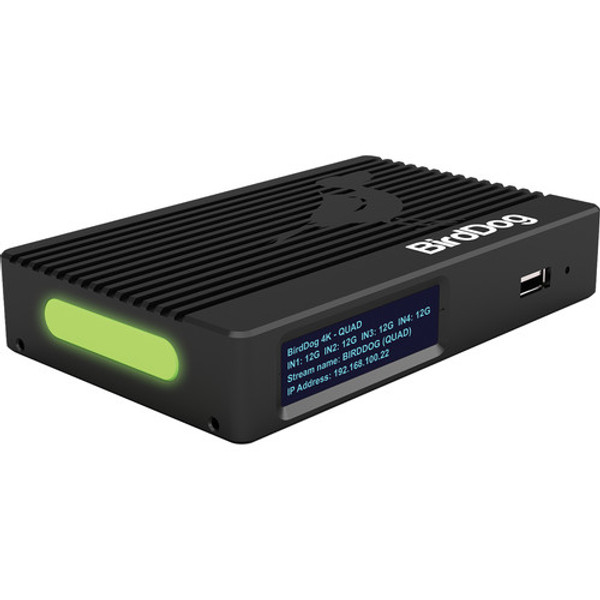 Based on BirdDog's custom NDI silicon chip, the BirdDog 4K Quad NDI Encoder/Decoder supports up to UHD 4K/60 video input for distribution on NDI networks in full-bandwidth I-frame compression. This compact device is housed in an aircraft-grade aluminum case and features four 12G-SDI selectable inputs/outputs and an HDMI 2.0 output. It also has a built-in cross converter that allows an SDI input to be looped out via the HDMI output.

Another major feature is an SFP+ expansion slot that supports SFP+ modules for fiber connectivity and Ethernet protocols from 1-10GbE. A Tally system with a large bi-color Tally light is also built for indicating which camera is live to on-air talent. The Tally system also allows user-selectable Tally borders on loop out. The device is complete with 3.5mm audio input/output, a 4-line OLED display, and USB 3.0 interface. It can be powered by a standard power supply or over PoE+.

The 4K Quad NDI Encoder/Decoder comes with the BirdDog Comms Lite audio intercom software, which supports up to four BirdDog devices. Comms Lite is Windows compatible and offers features such as Director Push-to-Talk, Mute Camera Operator, Auto Detect NDI Sources, Monitor Camera Audio, and Shortcut to Web Console. For a more complete version of the application, an optional upgrade is available to Comms Pro. The Encoder/Decoder is also compatible with the optional BirdDog Central software, which helps you decode NDI back to SDI or HDMI.